We were treated to Edmond Rostand's take on the life of Cyrano de Bergerac. There are at least 5 or 6 different versions of Cyrano’s life and this is one of my favorites. It is a bit wordy at times but very much symbolic of the theatre of that era. Last nights show was amazing, I had forgotten the beauty of the verse and the power of his poetry. His words are so eloquent and so raw, so real and so present and the actor delivering them was a perfect match and to boot he is married to the woman playing Roxanne in his really everyday life. More than anything else, I had forgotten that the first act is 2 hours long. Whew! I had to get another double espresso to stay alert enough for the hour-long second act.

There is much I miss about not seeing the variety of theatre I did when I lived in NYC and SF. The words stretch your mind and I love to listen to the Bards verse and to just let myself be swept away by it. The trick that I learned long ago was to not listen to hard, not to think about it too much and to just watch and in due course all of the nuances will become clear and you will innately understand as the beauty unfolds before your eyes and envelops your imagination.

Yesterday was a rather long day, 8 hours of driving followed by 2 full on Shakespearean productions. So, even after all of that and 2 cups of double shot coffee’s I slept hard for 6 hours and woke to the unfamiliar sound and smell of a lawn mower cutting grass! What’s grass? I can hardly remember. I also got to sleep with fresh air blowing in from the open sliding door, a luxury that I do not often get in the heat of a Tucson summer.

We went to a literary talk this morning about last’s night show. There was a Q&A session and I am amazed by some of the really inane questions that were queried. I admire the fact that people want to learn and I am grateful that festivals like this one offers to open up the Shakespearean world to everyone. But, there is the soul that just does not get it and continues to stream out unbelievable statements that even make the person running the Q&A do a double take. It was amazing to watch his reactions to some of the questions and observations made and he was very politically polite to all.

So after that the remainder of the early morning was spent perusing the Festival gift shop and walking around the campus and small but very quaint downtown shops. I found a really cool tin toy rocket that had to be mine! After having a light lunch and very European 2-hour siesta we all took a lovely swim.

What a treat to just relax for an entire afternoon. We are having a fun time after swimming, taking Jacuzzis, doing Sudoku with Carlisle, leaning how to juggle, play with Asia’s mask and listening to David make farting noises with his goggles. 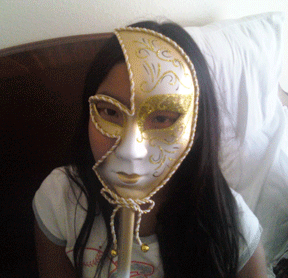 I am eagerly anticipating this evening’s performance of Othello. To say that it is a tragedy is the understatement of the decade. This poor dude is duped beyond belief by the mean and treacherous Iago and the famous quote “as one who loved not wisely but too well” sums up the complete sadness for the tragic consequences that were set into action by jealously.
Posted by Anne E. Mitchell at 3:38 PM