It has been one crazy week for our little world. I do not think that I have ever witnessed a week of more news worthy emotional extremes.

I am in awe of our President and his ability to multitask and not let anyone down in these past days. I know for sure that we elected the correct man for the job. Could you even begin to imagine the mess that McCain and Palin would have made of these same circumstances?

I am proud of our British and Italian neighbors, each nation put on a beautiful show that gave the rest of us a bit of a breather during an incredibly hard week.

Here is the last six days as I watched it unfold. Be amazed!

I waited in fear of knowing the damage that these storms can inflict and waited to hear from those I know in the areas that are suffering the effects of these storms. I grew up in Ohio and watched the Xenia tornado pass over my house so I know very well the power of nature.

April 28th
•The President of the United States faces down an idiotic group of "fundies" by releasing his long form birth certificate and it was no surprise the "fundies" still were not satisfied.

I was mad. I hated that our President needed to personally address our Nation and the News agencies to focus on what actually matters. Come on folks. STOP giving time and pandering to a circus clown. 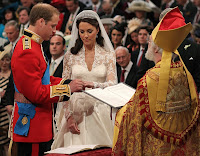 April 29th
• Prince William and Kate Middleton were married in England. An event that was watched by over 2 billion people and broke Internet records.

I got up at 2am to watch live. I had baked scones the night before to feel just a little bit British. The ceremony was so beautiful. No one does pageantry like the Brits! I loved the pageantry and I truly loved that the British accomplished the impossible. They incorporated the majestic pageantry of the day and totally made the event feel intimate and meaningful to William and Catherine.

I watched the news live of the damage in the south that the storms inflicted and took count of friends that were in its path. I breathed a sigh of personal relief with the knowledge that the people that I knew were okay.

I waited for the Space Shuttle Launch and wanted to Giffords so I could personally see her amazing progress. I was disappointed by the delay but was pleased to know that the President met with Giffords.

"The Donald” cries like the spoiled baby he is on Sunday morning Fox News. (Who else would listen to his crap pandering?) Welcome to the Big Leagues Donald, Wanna Play In This Sand Box? Here you go! I could not have been more delighted to see these two very intelligent men rip this idiot to shreds. I love watching that jerk just sit there and grind his teeth while the President put him in his place. (All during that event, our nation was preparing for the dangerous mission of crossing into Pakistan to take out Osama Bin Laden.)

May 1st.
Obama signals “GO” on an incredibly dangerous and risky mission to take out the most wanted man in the world and the mission is successful.

Beatification of Pope John Paul II was celebrated in Rome in a truly beautiful and memory filled ceremony at Vatican City.

I watched a good portion of the beatification, it was hard to concentrate with all of that Latin going on but the music and the pageantry was so beautiful. It has always been a dream of mine to see Vatican City to be able view the amazing structures and art first hand.

At 10:30pm I was texted by my girlfriend who is away in TX to turn to the news for the President. Obama informs the world that Bin Laden is dead and his body is in the custody of the American Military. I was in a surreal state of shock for the next 30 minutes. I was concerned by the jubilant response to the news. It is not what I felt at all.

I was taken by the following quote. "I mourn the loss of thousands of precious lives, but I will not rejoice in the death of one, not even an enemy. Returning hate for hate multiplies hate, adding deeper darkness to a night already devoid of stars. Darkness cannot drive out darkness: only light can do that. Hate cannot drive out hate: only love can do that." --Martin Luther King, Jr.

May 2nd.
Can we all take a breath now? I am tired and need a break from "The Breaking News."
Posted by Anne E. Mitchell at 8:42 PM 3 comments: