Quote of the Day: "Only the educated are free." Epictetus

When I sit down to try to write after a prolonged absence from posting I get frustrated by too many things to say. Not only do I have loads to comment on in the political arena I had much to say in regards to my personal life as well.

The beginning of March found me in Oakland for the NorCal one day show with my friend Gail Crosman Moore. We had some much needed time together and as usual it was way too short.

I got home to Abq. just in time for my presence to be required in jury duty for two weeks. Now this is two weeks of not being able to get work done during the day due to my inability to take my MacBook Pro into the courthouse. (it has a camera) I actually had to get my old PowerBok G4 shipped out to my from Tucson the last 2 days of my daytime "incarceration."

With my days being shot to hell in a hand-basket, my evenings were dedicated to scrambling like a crazed person getting ready for 3 weekends of events and teaching in April. As well as driving across the country and up and down the eastern seaboard for 3 weeks I am bopping in and out of Dayton getting my mom moved into her new apartment.

My mom has decided to finally sell the house that I grew up in from when I was 3 years old. I have not lived in this house since I was 18, so I have no real attachments involved. It is just difficult timing. I only have a two days here and two days there to get a load of things accomplished for her final move. I am very happy about her choice to get out of a house that was way to large for her needs and feel that this will simplify her life in a great many ways as well as be a very great new adventure for her.

This evening I am sitting in a hotel just east of Nashville TN drinking my tea and waiting for the Melatonin to kick in so I can get to sleep.

I am watching the news and am dumbfounded by so much of the fighting amongst the two parties in the House and the Senate. The bickering just keeps going on and on. The Republicans keep talking about how they want to focus on jobs but can only see fit to take away a woman's right to affordable health care by the de-funding Planned Parenthood, to pass legislation to de-fund NPR, eliminate collective bargaining through the newly elected Republican governors in our nation and try like hell to demean our President by any means necessary.

A post from the Daily Kos that made my day:

But let's put aside all the hot air and just look at the facts. Based on this chart of stock market performance under Presidents Clinton, Bush, and Obama, can you figure out which administration had the anti-growth record? 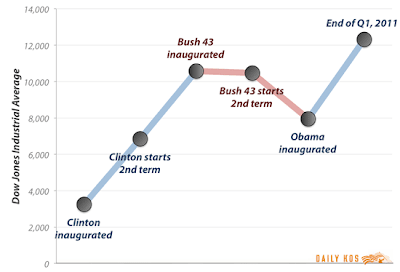