"Life shrinks or expands in proportion to one's courage." Anais Nin
I greeted this day in awe and wonder as I try to greet each day. It seems that some days the sun shines a bit brighter and what I saw as an obstacle pales in the light to what I witness my friends face and overcome. I hope to honor their courage by meeting my obstacles with a modicum of how they face theirs. 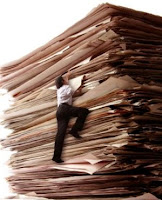 Whew, today was a day sitting at my desk with filling out paperwork. I figured out that by spending the billion dollars on the Adobe Creative Suite I coulds now fill out PDF forms without printing, filling out the form by hand, scanning them then attaching them to response emails.

What this means is that the 10 hours I spent filling out and signing contracts and submitting booth applications and really getting loads done today could have actually take twice as long as it did.

So, as much as I sometimes curse technology, there are times like today that I am pleased to have these tools at my disposal.

It has been a long day and tomorrow is going to be another day of lists and placing show orders. I took a brief break for 2 hours this evening to watch the Olympics and am looking forward to a good weekend of sporting events.
Posted by Anne E. Mitchell at 11:21 PM 2 comments:

I have been hiding for the last week. I really did not mean to, but I just needed to spend time with my GF and to not be interested in anything other than the Olympics. I was spending some serous down time in Albuquerque after the week plus insanity that was the Gem Show. I have gotten some very much needed rest and also got several pieces done for orders as well as for the Mariposa Gallery in Albuquerque. My metal work can be seen with Terri Caspary Schmidt's lampwork. I think the 3 pieces are nice indeed.

Being back home is always nice. I have missed my grey fuzzy girls and I look forward to curling up with them this evening. I still have a load of things on my "to do" plate that must be attended to over the next 48 hours. It is a rather daunting list of things that actually means I need to make a list of my lists in order to make sure that I get it all done.

As I am flying towards Tucson the snow is covering the high desert and I have to say that it is truly beautiful to see. I love a contrail, you know what I mean, those long white cloud-like trails that planes leave in their wake. Whenever I see one several thoughts go through my head.

1st - All of those people in a metal tube hurtling through space, damn that is so cool.
2nd - How did we, as humans, ever figure out how to get that thing off go the ground.
3rd - Are having beverage service right at this moment & what might I order.
4th - Landing is not really landing, it is just really controlled falling 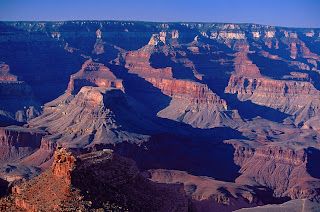 But in a more transcendent flying note: Seeing the curve of the earth at the horizon line from close to 40 thousand feet is a really amazing thing and I will never forget the very first time I saw the Grand Canyon from a plane. I was flying up to the Seattle area and just happened to look out the window and I about crawled over the person sitting in the window seat to get a better view. I have never in my life seen colors like that and to actuality grasp that is was the Snake River below me was way too cool. (I will always associate Evil Kneivel with the Snake River, can't help it.)

Well, I am off to get things accomplished and to make my list shorter and shorter as these next 48 hours tick away.
Posted by Anne E. Mitchell at 11:47 AM No comments:

It is already half way through February? ... Excuse me?

Whew, what a blazing, insane and whirling past nine days. I had a house and a guest house full of people exhibiting and assisting exhibitors for the Gem show and I was doing just the same, so for over a week every time I sat down to write about and post to my Blog I was just too tired and promptly curled up under warm covers and fell fast asleep till my alarm went off the next morning.

Gail and her Life Saving Get Around Wheel-y Cart. 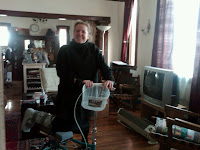 The week and a half was as challenging as it was fulfilling. My friend Gail Crosman Moore overcame way to many obstacles in order to get to Tucson from Massachusetts. In December she had hand surgery, so her poor right paw was in a hard splint to protect it and then to add to her difficulties she fell and broke her fibula just four days before she was due to get on a plane. She always has been a person that I have greatly admired for her humor, talent and soul but this display of grace under fire was totally inspiring. What a total trouper and every day was met with smiles, laughter and several cups of coffee.

Terri and Andrea at the Whole Bead Show's Late Night. 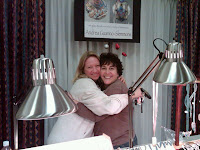 The show itself is always so much fun. I love that, pretty much, everyone shows up to either exhibit or to shop. There are many greetings and much hugging and the show is the kick-off for a new year. Every year the Gem Show seems to signify a new beginning of shows and teaching engagements and we garner the temperature for the new season to come by the general level of optimism those attending. I think that all of us were pleased to see that there is a greater feeling of optimism and a sense that the worst it behind us and that we are moving forward. I know that I certainly hope that this is in fact the case.

My favorite part of the week is Saturday night. We are all at the end or our perspective shows and the tensions of the build-up to it all has ebbed away. Last year, I had a large group of friends over for a cook-out and a real sit down dinner. We did the same this year and just as much fun and silliness and laughter was had by all.

We can be a boisterous group and I love to watch as each niche started laughing at their own conversations the general volume of the room grew. I enjoy how we share our stories of the week, our plans for upcoming years shows and how we can just relax for an evening. The simple bastion of a house and home to sit down in for few hours can really revive the soul. I truly love this night and I so covet this time that I have with my friends loved ones.

Terri and I drove back to Albuquerque yesterday and that officially brought the Tucson Gem and Mineral Show to a close for me. As we drove away from last minute shopping from the Gem Mall I realized how truly tired I was. I can normally drive for upwards of 10 to 12 hours at a time before I start to feel the effects but I only made it 3 hours before I had to hand over the task.

I have loads to do over the next week and a half and I am overwhelmed by the number of emails that I have to answer. I think that I will actually have to make a list of the lists that I need and start from there.
Posted by Anne E. Mitchell at 9:15 AM 2 comments:

There is an amazing clarity of thought and a sense of peace when you realize that time is fluid and that in order to feel totally a part of your world you just need to let it all go. I feel at times like I have suddenly been shifted to another reality; an alternate universe and that I have tripped through the time space continuum. I can walk into a room and certain things that I am totally sure of are just not so. I can look at a wall and comment n the new coat of paint and am told that it is several years old. Crap like that happens to me at times and I am just dumbfounded and I am no longer sure of which reality I am on or what reality I belong in. So, I just realize that time is not something that anyone can grasp and that our individual reality is only one reality out of billions of realities.

For the last few years, every few months I would do a Google search for an old high school buddy of mine. We where super tight and we did so much together for those 3 years of High School. Then came graduation and I went off to college, then I moved to NYC a few years after that and that was just it. I have no idea why that happened or why either of us let is continue. So, about 4 years ago I started looking. Face Book has re-connected me with several people that I have thought of often and I kept looking for my old friend. I was shocked and deeply saddened that he passed away just over a week ago.

The connection with these two paragraphs and the moral of this story is that do not let time pass into years and then let those years pass. Do not let this reality shift to where a friend no longer exists you cannot find someone that you once held dear.

Rich Masters was a comrade in our mutual theater antics, a fierce conversationalist, funny as all get-out, and a simply a really good dude. I counted him a good friend during my years in High School and I am kicking myself for not working just a bit harder to find him and re-connect. Had Rich not been taken too soon the series of events that has happened would never have occurred. This event has brought together a number of people from that time in my life that I have not seen since my graduation.

I am refocusing  and I am going to try to do better in this aspect of my life and I hope that I can find the value in my handling of the time that I am given in this reality.

Terri & her dear friend/assistant Carolyn got in on Tuesday afternoon from Albuquerque for load-in. We stayed up ways to late getting our individual last minute preparations organized for our shows. Sleep was illusive on Tuesday night and we all pretty much depended on our many cups do very strong Peet's French Roast Coffee in order to properly wake up.

I will post tomorrow about "all" of the happenings at the first day of the show. I am just a bit too tired and I need a better nights sleep tonight.
Posted by Anne E. Mitchell at 11:19 PM No comments: