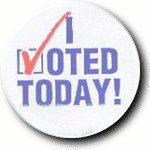 I have done it. I voted this morning. It was painless and fast. I stood in my little plastic cubicle and colored in my circles, making sure that I did not go out of the lines. I folded up my ballot and sealed it in an envelope and watched as the clerk slipped it into a locked bin. Took me all of 15 minutes from parking the car to getting back behind the wheel of my car. I took the weekend to really go over several local and state issues that I was not fully informed on. I found it important to vote on more than just the Presidential Election. I do feel that my vote is rather wasted here in AZ but my voice will be heard and my vote will be counted all the same.

I am kind of wondering when we are going to get past this Electoral College thing. I really would like my vote to mean something. I am voting for a person that my state is voting against and so my vote does not really count. Unless by some random miracle AZ goes Blue! The original concept for the Electoral College was brilliant. But now, it is outdated and no longer represents the people in the manner that it was intended to. What is the problem with one-person equals one vote and those votes get counted up and who ever has the most at the end wins. Seems so simple and so logical. That might actually mean that the candidates might actually have to visit all 50 states, address the issues of each region and pay more attention to the country as a whole and not just select pockets of the country where even if you win the popular vote you loose the election.

I have another question…Can someone please explain to me the problem with a National I.D. card? I do not grasp the fear associated with them? We have Social Security Numbers that are assigned at birth and these numbers stay with us for the entirety of our lives. Why can’t that number be placed on a card with our picture on it? I really do not get why people have an issue with them and I would like to understand this. Would this not solve many of the voter problems that we are having in these past few elections? The driver’s license was never intended to be used as a form of identification. It is just permission by a particular state saying that you understand the driving laws of that state. It is not and was never meant to be an I.D.

Lastly, I am sick to death of all of these states and the different ways that you can vote. I understand that the elections boards in each state are in charge but can’t they F-ing get together and settle on ONE SYSTEM for everyone? It would bring less up to date communities into the 21st century and would promote a system that would be state of the art. I have never had a problem coloring in my little circles and placing that piece of paper in a machine that read those colored circles and them that information went on it’s way via the Inter-Net. Why does it have to be THIS STUPID? We have been in this repetitive disaster movie for more then 8 years now. Can we not just GET IT DONE???

Do not even get me started on the random and regional acts of the TSA!
Oh, that is another issue entirely and it is one that I could vent on for HOURS!

As Rachel Maddow says "Can Someone Talk Me Down Please?"
Politics as usual need to stop, we need to fashion New Guards for the protection of our rights and our voices deserve to be counted and the votes we cast actually need to mean something.
Posted by Anne E. Mitchell at 11:43 AM