I took the weekend off from the world and all that I had to do and was a bit of a hermit, even more of one than I have been since the beginning of the year I guess. I got kits made for Santa Fe. I started working and re-writing a few handouts that needed some updates and will start printing those out tomorrow or the next day. I think that I just kind of needed to be lost for a few days. 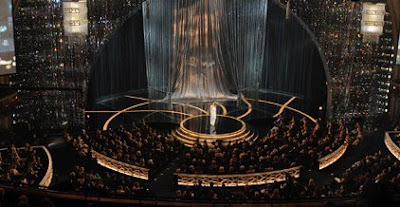 I watched the Oscars on Sunday night and I have to say that I was very pleased with the entire production. I thought that the set was AMAZING and that the lighting was particularly outstanding. All of the production values were very well done and I LOVED the 5 former winners all on stage each saluting on of the nominees for the 4 categories of performers. I loved Whoppie Goldberg’s nun remarks to Amy Adams…Now that was comedy. I thought that the new format lent itself back to an elegant evening that did not look like a who’s who of rotating stars.

I could not be more pleased than to see the screenwriter Lance Black and actor Sean Penn both win for Milk. As an openly gay person in our country at this time (especially after the elections in November) it was especially gratifying to see this movie get the recognition that it deserved.

I lit my graduate lighting thesis on a production of Execution of Justice by Emily Mann. It is a play that chronicles the trial of Dan White and reveals the entire Twinkie Defense and all that Mr. White did to get away with the premeditated murder of Harvey Milk and Mayor George Moscone.

To this day it was one of the most intense and most profound productions that I ever had the honor to be involved with. I have such a visceral reaction to the script that I innately knew what I had to do. It was the easiest and the hardest production that I ever had to light. It was SO personal to me. I find it amazing, the hatred that can be roused inside a person to lead them to an act of violence that actually made me hate Dan White. It took me a great deal of research and talking to those that were involved to see deeper into the each person and their lives. I am sure that she will never remember me but I had a 4-hour conversation with Diane Feinstein about that day and what it meant to her.

I got some very nice work done at my bench over the past few days and I actually reorganized my entire studio while listening to my entire Prince collection and talking on a video call for the better part of the day. It was a very excellent weekend where that was concerned and I had a great deal of fun and just kind of recharged myself for a few days.

Now for the real NEWS…ARE YOU READY?
There is 1 day and 14 hours till the opening of SPRING TRAINING.
I have gotten myself a ticket to the D-Back’s vs White Soxs opening day on Friday at Tucson Electric Park and my friend Vickie is actually coming into town to see Saturdays game against the Texas Rangers. I have not seen Vickie for almost a year and I am so excited to have her here even if it is for such a brief visit. Better 36 hours over nothin’…Right. I was going to go see her over my birthday but her BAD-ASS high powered job ended her in LA and we had to cancel. So, I am very happy that she is going to be here sop soon.
Posted by Anne E. Mitchell at 9:15 PM