The GOP's War On Woman Rights ..

Today:
The GOP House Oversight and Government Reform Comity, held hearings today on Woman's Contraception and was headed and it's participants were gathered by it's Chairman, Darrell Issa (R-Calif.) There was a panel assembled to discuss and answer questions concerning these women's issues.
Now let's take a look at the panel.
Do you see the same problem with this as I do?
I am asking one simple question..
Where are the women! 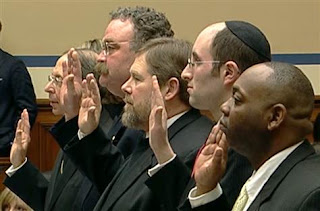 Read the entire story here:
House Democrats Walk Out Of One-Sided Hearing On Contraception, Calling It An 'Autocratic Regime'

Today:
On The Andrea Mitchell Reports news show:
Mitchell interviewed Rick Santorum's sugar daddy, Foster Friess. This was his response to the question of his candidates opposition to contraception "Back in my days, they [woman] used Bayer aspirin for contraceptives... "In my day, the gals put it between their knees and it wasn't that costly."


Yesterday:
Rick Santorum was campaigning in Idaho:
In Boise, Idaho, on Tuesday, Santorum compared contraception to deodorant and soap when making a point about why he believes birth control should not be covered by health insurers.

"Let's mandate that every insurance policy covers toothpaste. Deodorant. That might be a good idea, right? Have everyone cover deodorant, right? Soap. I mean, where do you stop?"


Yesterday:
Virginia Legislation Issue #1:
Virginia lawmakers took a step toward outlawing abortion on Tuesday by approving "personhood" legislation that grants individual rights to an embryo from the moment of conception.

The Republican-controlled House of Delegates voted 66-32 in favor of defining the word person under state law to include unborn children "from the moment of conception until birth at every stage of biological development."

Virginia Legislation Issue #2:
The second measure passed in Virginia requires that women seeking an abortion be forced to undergo an ultrasound, which would mean a more physically invasive transvaginal ultrasound in the cases of early pregnancy. The Virginia Senate passed an ultrasound bill earlier this month, as Reuters noted. Gov. Bob McDonnell has indicated his support for the law, and is expected to sign it.


I find it amazing that there has been absolutely NO discussion and NO problems with the Insurance Companies covering Viagra or Vasectomies. Don't You?
Posted by Anne E. Mitchell at 10:03 PM

What century is this???

Insurance companies claim that Viagra is a valid treatment for a "condition" - yeah.

Condition Indeed! That condition is known as a the male EGO!