Just a few observations on the turn of the public dialog over the last week.

I am dumbfounded that here in the 21st century we, the public, are entertaining a dialog over contraception and making it available for everyone at low cost or free. This should be a total "NO BRAINER" for the conservative right.

• ~ Hey GOP, you want fewer abortions? ~ Then let's not create more unwanted babies! This should be the biggest reason for the use of contraception in this nation where 1 out of every 4 children has an issue with hunger and borders on the brink or is on poverty.

• ~ Hey GOP, you want to get people off of welfare? - Then let's not force woman to have more babies that will actually trap these welfare recipients into the welfare system causal loop with no way out. Planned Parenthood's name is well stated here. Let's PLAN our pregnancies and not have people trapped with children that they have no way of supporting or truly caring for.

• ~ Hey GOP, you claim to desire smaller government! ~ Then get the hell out of my womb and my bedroom. This question was answered in 1965 with the supreme court decision of Griswold v. Connecticut in which the use of contraception was established as a "right to privacy" guaranteed in the 1st, 3rd, 4th, 5th, 9th & 14th Amendments. John Boehner can drop his feigned indignation, stop bashing the President and actually try to do his job for once.

• ~ Hey GOP, you claim that this is an attack on religious freedom! Then, I am sorry, the Catholic Church uses the pulpit to incite uninformed outrage. With the church using the pulpit in that manner the church relinquishes their tax free status granted to them by our government to guarantee its freedom. I have a news flash for all of you… If I am reading the outline properly, the only institutions that were to be required to provide contraception were the ones that were receiving public funds. At that point they relinquish their ability to refuse to follow the mandated laws of our nation.

• ~ Hey Catholic Church, you claim that this infringes on your doctrine. ~ I am not religious but I am spiritual in the deepest sense. The Catholic Church could not be more out of touch with its flock on this one. 98% of women in the Catholic Church use contraception to control when they start or add to their family. The notion that a bunch of celibate men have the right to say how their parishioners manage there families just boggles my mind.
I do not see the Catholic Church pouring millions of dollars into the poverty stricken nation of Jamaica after the Pope went there 1993 and told them to stop using the governments assistance with low cost contraception. The ensuing surge in babies went through the roof and has caused tremendous issues with more severe poverty and illness. 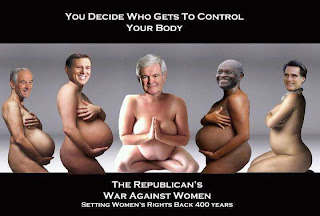 • ~ Hey GOP Candidates, each of you has expressed your desire to lessen the role of government in our daily lives. YET, so much of what you have been touting only allows the government to control us even further.  i.e. Drug testing for those who receive government funds, even if they are not suspected of drug use. That is an invasion of privacy and wastes millions if not billions of tax payer dollars. How about we test all of Congress, they receive federal funds in the way of a paycheck and health insurance.

I just have one final thought especially for Newt and for Rick. I truly hope that you are never engaging in sexual intercourse in any way other than to procreate. Procreation is only reason for sexual relations in the true doctrine of your Catholic Faith. If you are sexually active and not trying for children and you are NOT using contraception, are you timing your interpersonal relations with your wives biological clock? If that is the case, then you are in direct conflict with your faiths religious doctrine. Better cut that out boys.

These politicians claim to love this country, yet they hate those who do not share the same ideals. This was a nation founded on the basis of these differences and they they would be our strength and we would engage on a common discourse to allowed for a coming together for a stronger Union.

I wish I could find the reset button.
Posted by Anne E. Mitchell at 3:04 PM