Can you believe that this year is now over but the first decade of the 21st century has passed? Look at what has ingrained itself into our Lexicon that was not there 10 years ago. We knew nothing of Blogging, Twittering, Instant Messaging, YouTubing, Blackberry SmartPhones or Skype. Our world has changed so quickly and it constantly amazes me how quickly we human beings are capable of mastering these new techniques and make them our own so they show off our individual styles.

It has been an amazing year for me on many levels. For me this was a year that had as many trials as it had successes. Each year, I pick word to focus my plans on for the year. My word for 2010 is to be ~DETERMINATION~. Not matter what goals I set for myself the focus on the path to each of those goals is ~DETERMINATION~. Choose your words wisely and make sure that they are words of strength and not words that put up boundaries for you. 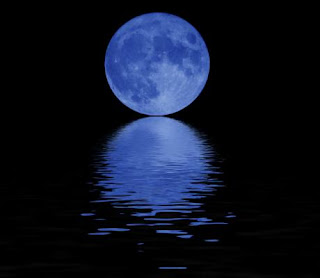 ~HAPPY NEW YEARS EVE ALL ~
This New Years Eve we are to be treated to a ~Blue Moon~ A blue moon is a full moon that is not timed to the regular monthly pattern. Most years have twelve full moons which occur approximately monthly, but in addition to those twelve full lunar cycles, each solar calendar year contains an excess of roughly eleven days compared to the lunar year. The extra days accumulate, so that every two or three years (on average about every 2.7154 years[1]), there is an extra full moon. The extra moon is called a "blue moon." an astronomical rarity that occurs just seven times every 19 years, hence the famous phrase "once in a blue moon." The last time was in 1990; the next one won't come again until 2028.

What's more, this New Year's Eve, people living in the Far East will see a lunar eclipse, making this an even rarer...er rarity. A blue-moon eclipse only happens once roughly every 15 to 20 years.

Revel in the festivities, have a safe and prosperous 2010 and I wish much happiness to us all.
Posted by Anne E. Mitchell at 10:54 PM